Scientific focus in Bioelectrics is the interaction of pulsed electric fields (PEF) with biological cells, tissue and organisms. In general, for PEF exposure, the biological material is suspended in aqueous solution between two electrodes, which are connected to a high voltage pulse generator.

Basically, the effect of PEFs on biological cells and tissue can be subdivided into two regimes: 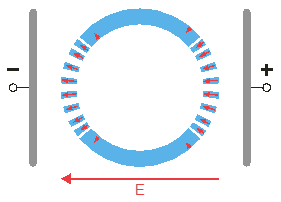 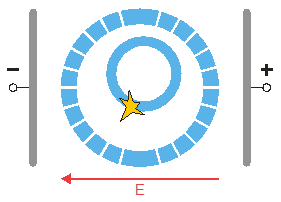 For slowly rising and low-amplitude field pulses, only the plasma-membrane of the cells, which can be considered as an electrical isolator, is affected. Initially, the electric field in the cell interior is zero. Due to the external electric field, the cell´s plasma-membrane is charged. Elevated transmembrane voltages cause a structural reorganization of membrane constituents, i.e. the phospolipid molecules, which results in an increase of membrane permeability by formation of aqueous pores, see illustration to the right. This process is called electroporation. It is applied for exchanging water-soluble substances across the cell boundary.

When applying fast-rising and high amplitude electric field pulses, large displacement currents across the membrane can access the cell interior and affect intracellular structures. The resulting intracellular electric field interacts with polar molecules and charges organelle membranes. Most prominent reactions of biological cells on this so called ultra-short pulse exposure are calcium emission from intracellular stores (mitocondria) and release of apoptosis. Several nanoseconds into the pulse, the plasma-membrane responds by generation of a large number of very small and subsequently fast resealing pores, illustration, right.